VLADIMIR Putin’s shadowy fleet of submarines dedicated to tampering with vital undersea internet cables could cripple Britain and plunge the country into chaos.

The vessels are operated by a shadowy branch of the Russian military that answers directly to Putin – with a mission to deliver a catastrophic blow to the West.

The subs are carried underneath beneath an enormous “mothership” undersea vessel and are built to lurk at the bottom of the ocean – entering the Atlantic by sailing down from the Arctic.

They then use robotic arms to tamper with or even cut key cables that help keep the world’s economy moving with potentially devastating consequences.

It comes as Putin has opened up a new front in the North Pole as he builds new military bases in the frozen wastes – giving him control of polar waters across 11 of the world’s time zones.

Tensions continue to simmer between the West and Russia who have both beefed up their presence in the polar region, which is believed to hold significant natural resources.

And cutting the undersea cables could be a key element in any conflict between the two sides.

Undersea cables crisscrossing the seafloor carry 97 per cent of internet traffic with $10 trillion worth of daily financial transactions dependent on them.

Cutting enough of the network in the Atlantic could cause chaos for Britain, with Air Marshall Sir Stuart Peach previously warning such a breach could be “catastrophic”.

It could shut down the internet, cut Britain off from the rest of the world, paralyse financial transactions, and damage communications with the military overseas.

And the US is also under threat, with a report Director of National Intelligence urging Washington to push for stronger protections for the undersea cables.

The US Government is reliant on the cables to transfer information with their NATO allies – and as well as cutting them, its also feared Russia or other state actors could tap into the cables to steal information.

Defence expert Rob Clark from the Henry Jackson Society told The Sun Online “the threat is very real” from the secretive Russian subs.

“Their aim is to retain the credible capability either to disrupt or destroy the cables that the UK’s economy and its entire communications rely on,” he warned.

“Even slightly damaged that can cause untold chaos and disruption to the UK.”

The dire warning comes as it emerged the threat is being taken so seriously that the Royal Navy has recently ordered a special surveillance ship to protect cables from the Russians.

And one US submariner even described to The Sun Online how he witnessed the Russians practicing lifting the cables in a dress rehearsal for cutting them during any showdown with the West.

The concentration of cables in chokepoints means any disruption is likely to hit hard, as an earthquake under the Luzon Strait between Taiwan and the Philippines showed in 2006.

The quake severed six out of the seven cables used to distribute internet and phone services from North America to Taiwan, China, Hong Kong, Japan, Singapore and South Korea.

That led a 100 per cent internet outage to Hong Kong and South East Asia, cutting off millions of citizens and businesses from internet and mobile phones.

It has been estimated that cutting three cables could lead to some countries losing 70 per cent of their data traffic.

The impact of any outage on that scale would severely damage the world financial system.

Globally, it has been estimated an average of 15 million transactions a day are wholly reliant on undersea cables alone.

Now Chancellor Rishi Sunak MP penned a paper on the threat in 2017 in which he warned of “full-scale outages” caused by the cable cutting and coordinated sabotage is a “major threat to the UK”.

“A successful attack would deal a crippling blow to Britain’s security and prosperity,” he wrote. 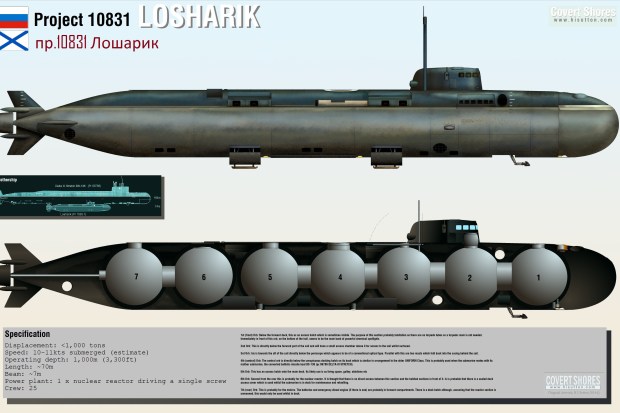 RUSSIA is believed to have six submarines dedicated to the cable cutting mission – with the Losharik the most modern and capable.

Only a handful of grainy photographs exist of the vessel and everything known about it comes from educated guesswork.

A fire on board Losharik in 2019 resulted in the deaths of 14 submariners, reportedly including some of the most experienced decorated in the Russian navy.

The Kremlin has never explained what the submarine was doing just 60 miles off the coast of Norway in the first place.

According to submarine expert H.I Sutton, who writes the Covert Shores blog, the submarine is constructed from seven spherical titanium hulls strung together which gives it extraordinary strength.

The vessel is named after a Russian cartoon horse, which is made up of lots of many spheres joined together.

It can operate at up to depths of 3300ft, far greater than conventional submarines and have special attachments allowing them to rest at the bottom of the sea.

The submarines are deployed from the giant Belgorod, itself designed for special operations, and currently the longest submarine currently serving in the world’s navies.

Mr Clark said disrupting the undersea cables rather than completely destroying them would fit into Vladimir Putin’s goal of goading the West.

“A more likely scenario would be to disrupt the cables rather than destroy them,” he said.

“What should be the response to this? Should we torpedo the submarine or launch a cyber-attack on the Moscow stock exchange?

“Because of that Russia will try to exploit it because they know it’s a weakness.

‘Destroying them would be such a provocation from Russia the likes of which we’ve never seen since the Cold War, even compared to the Salisbury attack.

“So disrupting them is a much more likely scenario. So for example if there was an escalation of UK commitment to the Ukraine, where the British army and Royal Navy are training, then that would a response from Russia.”

The Russian’s tactics were first deployed during the Cold War and they have been refining them ever since.

Former US submariner Aarron Amick. witnessed the cable cutting subs in action firsthand while working as a sonar operator off the coast of Norway.

“We were monitoring a unit around the coast of Norway when they sent out a mothership, which was a specially modified ballistic missile submarine that had the missiles removed,” he told The Sun Online.

“The area where the missiles were was basically a hanger for a second mini-sub, which they would dock in the belly and they would go down the coast of Norway, which very convenient as it was the closest country with cables.

“They would undock the sub and it would dive very deep, practically to the bottom to locate where these cables where so they could go right to them.

“They would also practice picking them up, not necessarily damage them because it was peacetime, but give them experience in doing everything except that.”

Vulnerable undersea cables – the width of a garden hosepipe 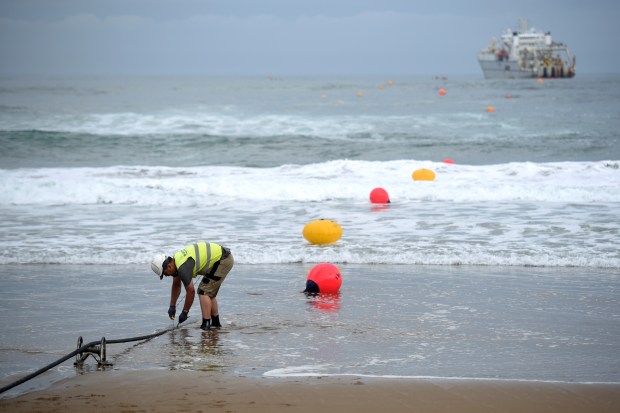 THE FIRST cable was laid across the Atlantic 1858 and have been at the heart of global communication ever since.

They are mostly operated by private companies with Google recently announcing plans to install a cable linking the US, UK and Spain that would come ashore in Cornwall.

Most cables are around 3cm in diameter, roughly the size of a hosepipe and are cased in galvanised steel armour with a plastic coating.

Data is transmitted down the optical fibres as wavelengths of light travelling at about 180,000 miles per second.

Each fibre has the capacity to transmit as much as 400GB of data per second – about enough for 375 million phone calls.

A single undersea cable can contain anywhere between four and 200 of these fibres.

With so much of the world now dependent on the internet, they have also seen as an Achilles heel.

The idea of tampering cables as a weapon of war was developed by the British in World War One, when German communications were intercepted and its cables cut.

But the Russians have in recent years been seen as a looming menace, building on methods from the Cold War.

When he was an MP, the current Chancellor Rishi Sunak warned about the threat in hard hitting report.

“A successful attack on the UK’s undersea cable infrastructure would be an existential threat to our security,” he said.

He said the US Navy crew observed the operation over a three months and said he was “impressed” by the Russian’s capability.

“I was doing my job and being professional but in the back of my mind was impressed. At the time the American navy had none of this capability.

“It’s fantastic that this thing goes and this activity continues today.”

Navy warfare expert Sidharth Kaushal from defence think-tank RUSI said the submarines are operated by the GUGI or Directorate for Deep Sea Research, which answers to Putin.

Donnelly reveals how Ireland can make ‘permanent exit’ from pandemic

Temps to plummet to -4C with snow, frost & thunderstorms as arctic freeze to hit

“They’ve been developing a variety of special purpose submarines which are deep diving and have the capacity to withstand very deep pressures,” said Dr Kaushal.

“They could be used for a wide range of activities from tapping into the cables to gather intelligence to severing them to cause economic disruption in an extreme scenario.”

He said cutting cables “fits well” into a Putin’s strategy for fighting the West.

“He knows his conventional forces are inferior to Nato so the emphasis is to impose as much disruption to Western society to convince them the game isn’t worth the candle,” he said.