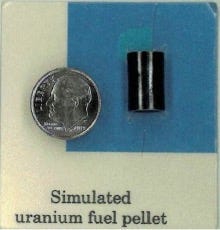 We continue the amazing broader history of gaseous diffusion as envisioned by Gordon Fee and prepared by Steve Polston, who was at one time the manager of the Paducah (Ky.) Gaseous Diffusion Plant and now retired. Steve agreed to help and took on the task of producing a draft document. We also included Jim Rushton, Ralph Donnelly, John Shoemaker, and finally, an exceptional writer who has expertise taking technical information and editing it into language the public can better understand, Alan Brown.

Part I of this column was published last week.

During World War II, President Roosevelt assigned the atomic bomb project to the Army Corps of Engineers, which had a huge budget and could conceal the bomb’s development costs and progress from U.S. enemies. It was named the Manhattan project because the Corps of Engineers’ District in charge of the project was located in the Manhattan borough of New York City.

Without the gaseous diffusion process, the atomic bomb in needed quantities could not have been made. The consensus among historians is that America’s use of the atomic bomb shortened the war in the Pacific and potentially saved millions of lives by making a ground invasion of Japan unnecessary.

Although the United States and the Soviet Union were allies during WWII, tensions between the two nations rose over the political future of Europe. Those tensions escalated in August 1949, when the Union of Soviet Socialist Republics (USSR) exploded its first atomic bomb using a design stolen from the United States. This ushered in the Cold War, an open but restricted rivalry that threatened direct nuclear confrontation between the world’s two superpowers. The nuclear threat continued until the early 1990s, when the USSR finally collapsed.

In July 1950, the National Security Council (NSC) directed the Atomic Energy Commission (AEC) to find a second site (beyond the Oak Ridge K-25 Plant) to produce enriched uranium used in nuclear weapons by “no later than October 1st, 1950.” A primary reason for the expansion was the threat of military intervention by China into the Korean Conflict.

The NSC letter included a familiar plant site checklist, such as adequate labor supply, local air transportation, and river access. It also added unique criteria, calling for a site more than 500 miles from the reach of submarine-launched missiles and more than 100 miles from cities with known communist subversive activity.

The AEC was given only three months to find a site for the plant. To meet that deadline, the NSC recognized that it would have built on existing U.S. government property. Paducah, Ky., was chosen as the site best to meet all these criteria.

As the Cold War intensified, a third diffusion plant was opened in Portsmouth, Ohio, in 1955 to increase the nation’s nuclear materials output. Located at least 150 miles from both Oak Ridge and Paducah, the plant increased the likelihood of diffusion capability surviving if the nation was every attacked. Any two of the three existing plants were able to meet total U.S. production needs for the U.S. military.

Gaseous diffusion provided all the fuel for the nuclear reactors that propelled the U.S. nuclear navy. The fleet began in 1954, when the U.S. Navy launched the world’s first nuclear submarine, the Nautilus. Nuclear reactors went on to power a fleet of submarines, cruisers, and, beginning in 1960 with the Enterprise, aircraft carriers. Today, the U.S. Navy’s nuclear powered fleet includes 72 submarines and 11 aircraft carriers.

The ship-based nuclear reactors can run for 20 to 25 years without refueling. This gives the U.S. nuclear fleet a major tactical advantage, enabling it to deter aggression while rapidly projecting military power all around the globe.

Gaseous diffusion was an energy-intensive process. Yet for every 1 kilowatt-hours (kWh) of electrical energy used to enrich uranium, the enriched fuel generates approximately 54 KWH of electricity in a nuclear power plant.

A single enriched uranium fuel pellet (0.5 inches diameter, 0.5 inches long) contains the energy equivalent of 2,000 pounds of coal. A typical nuclear power plant uses about 18 million of these small pellets at a time, equivalent in power to 170,000 railcars loaded with coal.

In 1964, the U.S. government ceased production of weapons-grade uranium after deciding that it had enough enriched uranium in inventory and could recycle fissile material found in older nuclear weapons. At that point, all gaseous diffusion production was diverted to the U.S. Navy and peacetime nuclear power plants.

In 1969, the United States began a toll enrichment program, using gaseous diffusion plants to enrich nuclear fuel for U.S. and foreign operators of nuclear power reactors. Under the program, customers would provide unenriched uranium hexafluoride containing 0.7115 percent U-235 to the U.S. Department of Energy. It then enriched the material in its gaseous diffusion plants to between 3% and 5% U-235 and returned the enriched fuel to its customers.

Toll enrichment was not a novel concept. It could be traced back to a centuries-old practice of the miller’s toll, where the owner of a mill would grind wheat or corn in exchange for a portion of the ground grain as payment. Similarly, in uranium toll enrichment, the customer pays a fee, or toll, depending on the degree of enrichment.

Over time, the major nuclear powers and several other countries that operated nuclear power plants built their own enrichment facilities. By the mid-1990s, the two remaining DOE gaseous diffusion plants could no longer compete with these overseas facilities. In 1998, Congress passed a law to privatize the still-operating Paducah and Portsmouth facilities, believing that a privately held company would prove more competitive with foreign producers. The U.S. Enrichment Corporation (USEC) was formed to operate the two facilities.

While the transition to private ownership was under way, the newly formed USEC negotiated a deal with the Russian Federation to buy enriched uranium contained in approximately 10,000 Russian nuclear warheads. Weapons grade uranium is typically 90% U-235. USEC blended it with depleted (mostly U-238) uranium until it reached the 3% to 5% level needed for nuclear reactors.

While this was a great step for nuclear disarmament, it further drove down the demand for enriched uranium from the remaining U.S. gaseous diffusion plants. By 2013, all U.S. diffusion-based uranium enrichment production ceased. The United States is currently operating on its reserve enrichment inventory for military needs.

Demand remains high for enriched uranium for nuclear power plants. Today, this need is satisfied by centrifugal enrichment. This process that spins uranium hexafluoride gas in a cylindrical tube at speeds in excess of 1,000 revolutions per second, driving the heavier U-238 gas to the edge of the tube. The lighter U-235 gas remains closer to the center, where it is removed and purified again and again. The URENCO plant, owned by a European consortium and located in Eunice, New Mexico, is the only centrifugal enrichment plant operating in the United States.